Through Penn Station one entered the city like a god. Perhaps it was really too much. One scuttles in now like a rat. 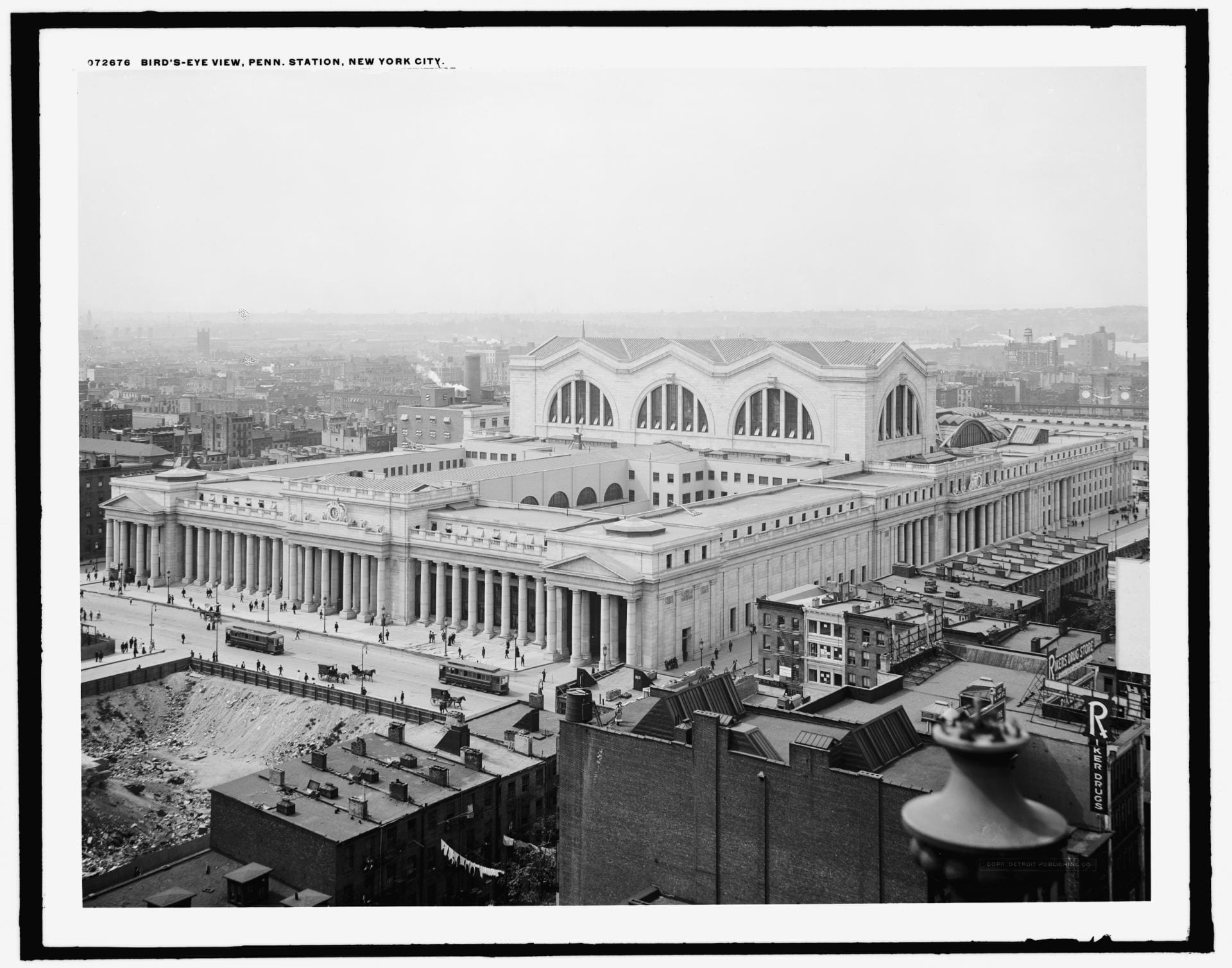 Bird’s Eye View from Northeast to Southwest in 1910-20

Human beings, myself included, have an unfortunate tendency to appreciate people and things only after they are gone. Pennsylvania Station is the catalyst for the historic preservation movement.

The old Penn Station, completed 1910, had 21 tracks on 11 platforms. The new Penn Station has 21 tracks on 11 platforms. In the demolition process, not one track or platform moved. This similarity enables us to situate parts of the old structure in relation to the new. The photos below compare this structure past and present. The old photos are drawn from the digital archive of the New York Public Library, Historic American Buildings Survey, and Library of Congress. The current photos were all taken by Myles Zhang in March 2019. Current photos are as close as possible to the original camera angles. However, some changes in the station layout and access rights to the areas above make complete accuracy prohibitively difficult.

A 2015 article from the New York Times asks the question: What does architecture sound like? Considering this question, I thought to record the sights and sounds of the current Penn Station. So, the audio accompanying each frame in the video above is accurate to what the place sounds like from the location shown. The audio for the old Penn Station is my imaginative reconstruction of how the original station might have sounded like. Surely, the high stone walls, glass interiors, and electric trains beneath would have evoked a different aura and sound of luxurious rail travel. This sound track is copied from recordings and moving images made of NYC in 1911 and preserved at MoMA.

Main Facade Center to Northeast in 1963 by Walker Evans

Main Facade Center to Northeast in 2019

We begin our approach to old Penn Station at the intersection of Seventh Avenue and 32nd Street. When the station opened in 1910, and before the subway lines were extended south along Seventh and Eighth Avenue, this was the main axis of approach. A temple front with six solid stone columns and a rectangular pediment above greeted visitors. Three eagles adorned either side of the clock, six total. After demolition, two of these eagles survive and are now placed on concrete pedestals in the adjacent plaza. Originally, one entered Penn Station at street level. Now, one descends about 20 feet to an underground corridor.

This is the same entrance, viewed head-on from 32nd Street. Beneath this street, the Pennsylvania Railroad constructed its double-track tunnels stretching from here to Sunnyside Yard in Queens, and onward to destinations in New England and Long Island. These two tunnels survive, but everything above ground does not.

South Facade toward Northwest in 1962 by Cervin Robinson

This is the view from the 31st Street side between Seventh and Eighth Avenue. The mass of the main waiting hall rises in the center, as indicated by the arched thermal window. The colonnade at center left corresponds to the taxi and car drop-off and pick-up area. After demolition, developers erected the round mass of Madison Square Garden on the foundations of the former waiting hall and train concourse.

Main Facade from Southeast in 1962 by Cervin Robinson

Main Facade from Southeast in 2019

This is the view from the corner of 31st Street and Seventh Avenue. Contrary to appearances, the old structure was entirely steel frame with limestone and granite facing. Only the columns on the main façades were solid stone.

Main Facade from Northeast in 1962 by Cervin Robinson

Main Facade from Northeast in 2019

By the 1960s, the structure was sooty with car exhaust, as seen in the above photo from 33rd Street and Seventh Avenue. The rest, however, was in excellent condition.

After entering Penn Station from the Seventh Avenue side, a long vaulted shopping arcade greeted visitors. The shops here were the only source of outside income for the railroad at this location. In later years, the shops did not even provide enough rent to cover the $2.5 million spent yearly on upkeep (1961 value from Ballon on p.99). Considering the size of this double-block and its prime location in Midtown, the old Penn Station generated precious little income for its owner. Currently, the lobby of Penn Plaza occupies this location — an office building with 700,000 square feet of space. Formerly public space is now rendered private. Also, note the statue of Alexander Cassatt at center right (President of the Pennsylvania Railroad).

Waiting Hall Entrance from East to West in 1900-20

Proceeding down the arcade, one entered into the main waiting hall — a vaulted space about 150 feet high by ~300 feet wide. One descended a wide pair of stairs — note the statue of Cassatt in the niche. This was one of the largest internal public spaces in the city.

This is the door into the restaurant. The arcade is on the left hand side. The stairs descending to the waiting hall are on the right hand side. Hilary Ballon writes that this “vestibule was a transitional space; it was dimly lit and nearly square to counter the directional force of the rooms on either side. It provided a moment to pause and prepare for the grand descent into the waiting hall” (p.62). This part of the building now roughly corresponds to a sub-basement buried below the walkway linking Penn Plaza to Madison Square Garden.

Waiting Hall from East Entrance in 1911

This is the view down into the waiting hall. The coffered ceiling and thermal windows are modeled on the Baths of Caracalla in Rome. In the rectangular panel beneath these windows are maps of the United States and the rail networks of the Pennsylvania and Long Island Railroad. Contrary to appearances, this space contains little stone. The entire frame and support structure is of steel beams with plaster above (for the vaults) or thin limestone panels (for the walls). Ballon writes: “For those approaching from the arcade, the directional contrast in the waiting hall also created a sense of space exploding horizontally. The freestanding fluted Corinthian columns and robust curls of the acanthus leaves, the strongly projecting entablature blocks, and layered ceiling offers these sculptural features made the weightless volume of the waiting hall seem weighty. Like the plenitude of a sheltering night sky, the enormous space was both humbling and uplifting” (p.64).

Waiting Hall to Arcade in 1962 by Cervin Robinson

Here’s the view back up the grand stairs, this time from the waiting hall toward the arcade. The original Penn Station had no escalators from tracks to concourse or waiting areas to street level. Passengers would have had to carry their luggage up and down steep stairs; the architects of Grand Central observed this problem at Penn Station. Grand Central has ramps instead of stairs to ease movement between levels. The escalator shown in this 1960s photo is a later addition.

Waiting Hall in 1962 by Cervin Robinson

This is the waiting hall in the 1962, months before demolition began. The roof and walls are visibly sooty. Where this space once stood is now a parking lot for trucks and buses using the loading dock beneath Madison Square Garden. The wall of windows at left is Penn Plaza. The sliver of building at right is the Garden.

Waiting Hall from South to North in 1911

Now a void between Madison Square Garden and Penn Plaza

This older photo was taken in the morning, as the sun rose over New York, penetrating the east-facing windows, and illuminating the waiting hall. Most of the old station’s public areas and track level were touched by natural light. By comparison, no natural light enters any part of the new Penn Station. Currently, this area is a difficult-to-access parking lot — patrolled by armed guards with bomb-sniffing dogs, who shouted at me to get off what they claimed was “private property.”

After passing through the waiting hall, visitors entered the train concourse. This was also a massive room, bathed in natural light, about ~300 feet long, ~200 feet wide, and 90 feet tall. From here, large chalkboard signage (erased and written manually) directed passengers to their right track. The above photo shows the two levels — the lower for arrivals and the upper for departures. Ballon describes the end of this journey from arcade, to waiting hall, to concourse: “The spatial compression directed attention down to the tracks, where were illuminated by natural light and visible through the cut-away floor. The vista of the sky above and tracks below created a sense of transparency in the concourse, as if the visitor was seeing with x-ray vision” (p.68).

This 1930s photo by Berenice Abbott shows the intricate web of ironwork supporting the skylights.

The upper level of the concourse had four exits: three minor exits north toward 33st, south to 31st, and west to 8th Avenue. The main and most ornate exit from the concourse was toward the waiting hall and 7th Avenue. Shown above is the 33rd Street exit. The wide dark exit to the right leads to the pick-up point for “Carriages and Taxicabs.”

Concourse from North to South in 1962 by Cervin Robinson

Concourse from North to South in 2019

This is the view northwards from the 31st Street entrance to the train concourse. This photo now corresponds to the VIP entrance for spectators at Madison Square Garden.

Here is the concourse again. In the old photo, the left exit leads to 33rd Street while the larger and arched right exit leads to the waiting hall and a baggage concourse. No trace of the old structure remains in the new photo. This is still a train concourse — except now with oppressive drop ceiling and exits to Amtrak trains.

Concourse from Northeast to Southwest

Concourse from Northeast to Southwest in 2019

Concourse from South to North in 1910

Concourse from South to North in 2019

Concourse from Track ~6 to Northeast

Concourse from Track ~6 to Northeast in 2019

Many of New York’s greatest landmarks feature Guastavino Tile vaults. Penn Station too. The main area of the train concourse was covered with glass. But, the lateral row of vaults with an oculus in the center of each was made of Guastavino. No trace of these self-supporting terracotta tiles survive at Penn Station, except for a single vault at the southern exit for the local southbound One Train.

Concourse from Track ~10 in 1962 by Cervin Robinson

Concourse from Track 6 to Northeast in 2019

This is the view from Track Six up past the lower concourse for arriving passengers, the upper concourse for departures, and toward the glass vaults. When this structure was demolished, Madison Square Garden was erected on the exact same bedrock foundations. The locations or number of tracks did not change, nor have the locations, width, or size of almost all stairwells. As seen in these photos, a few new supports were added to support the now much heavier structure above.

Concourse from Track 6 toward North in 2019

The failure to rebuild the now grossly inadequate Penn Station is not about lack of money. Built for 200,000 commuters in 1910, today, 650,000 people go through Penn Station each day, more than the daily passengers for all three major New York City-area airports combined. The failure to rebuild is not about lack of demand either; these numbers are expected to continue growing.

This is, more than anything, a failure of political will and a lack of interest in sustaining and improving the nation’s critical rail infrastructure. The current station makes a profit for its management — from the stadium and offices above. Any new station that restores natural light to track-level and revalues the passenger experience over profit is unlikely to be as lucrative. Few tangible profits are to be made from beauty.