As featured on Kottke.org

This digital model and film show, for the first time, the entire Model T being assembled from start to finish in a single time-lapse shot of the Ford factory in Highland Park, Michigan. Numerous photos were taken and some films were made in the 1910s and 1920s, but no film from the time tracks the entire car’s assembly from start to finish. There were many types of Model Ts produced, but the specific car shown here is the 1915 Model T Runabout. Watch the film and see as the various car components are hoisted over and bolted into place. Or walk across the factory floor in the virtual reality computer model.

The film’s audio replicates the sound of Model T production. The accompanying music at start and end is from the 1936 film Modern Times, where comedian Charlie Chaplin parodies Ford’s assembly line production methods. 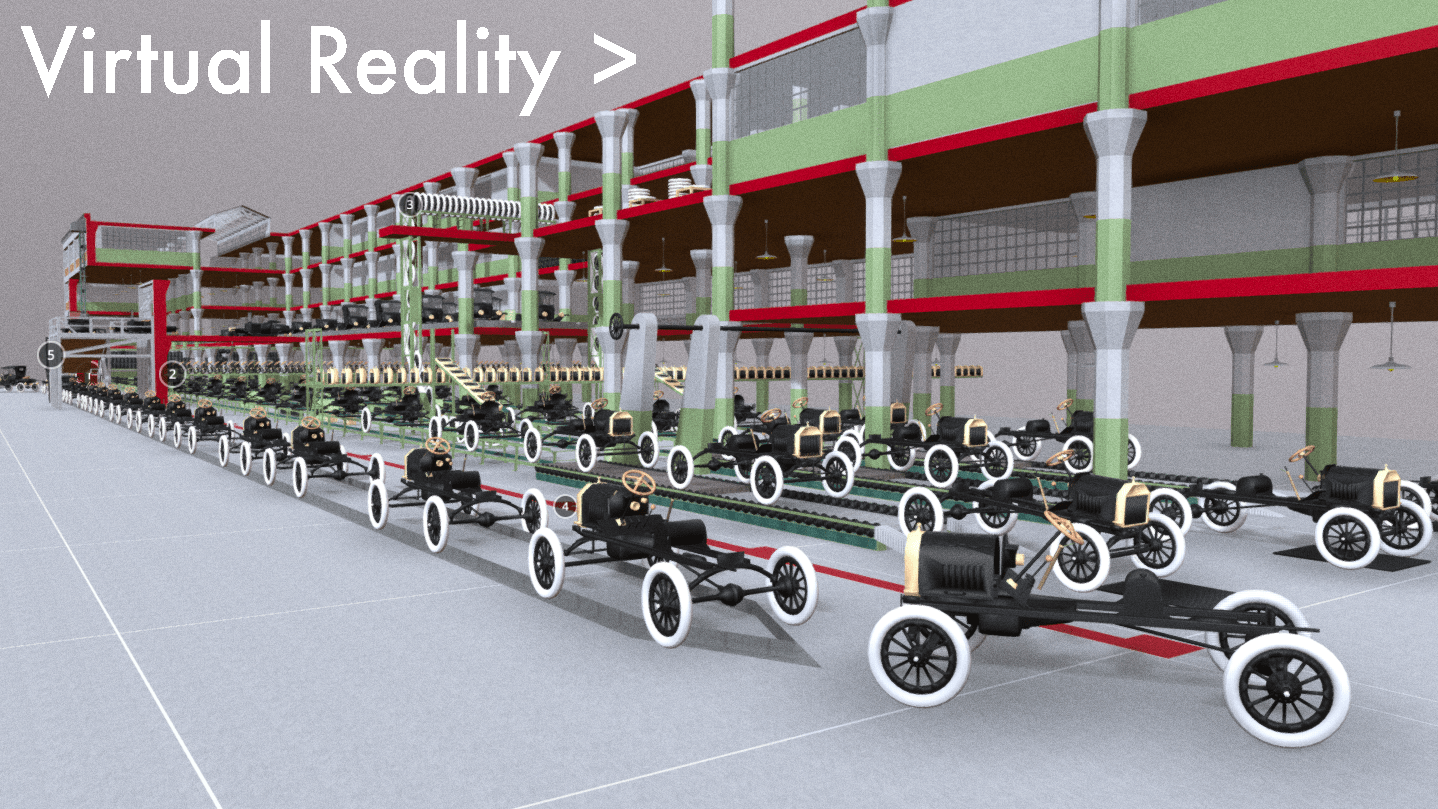 Henry Ford did not invent the car, nor he did invent the assembly line to produce the car. For years before Ford, cars were being built in small numbers at local workshops. For centuries before Ford, assembly line production was being used to make all manner of goods like pins, fabrics, and steel. At the same time as Ford, others were making cars and building assembly lines.

Ford was not the first, but his car and moving assembly line were certainly the most successful and memorable. After creating his version of the automobile in 1896, Ford moved workshops first to Mack Avenue and later to Piquette Avenue in Detroit. These first two factories were small-scale structures for limited car production. Only in 1913 at Ford’s third factory at Highland Park did mass-production begin on a truly large scale. As shown in this film, here Ford applied assembly line methods throughout the factory to all aspects of car production. 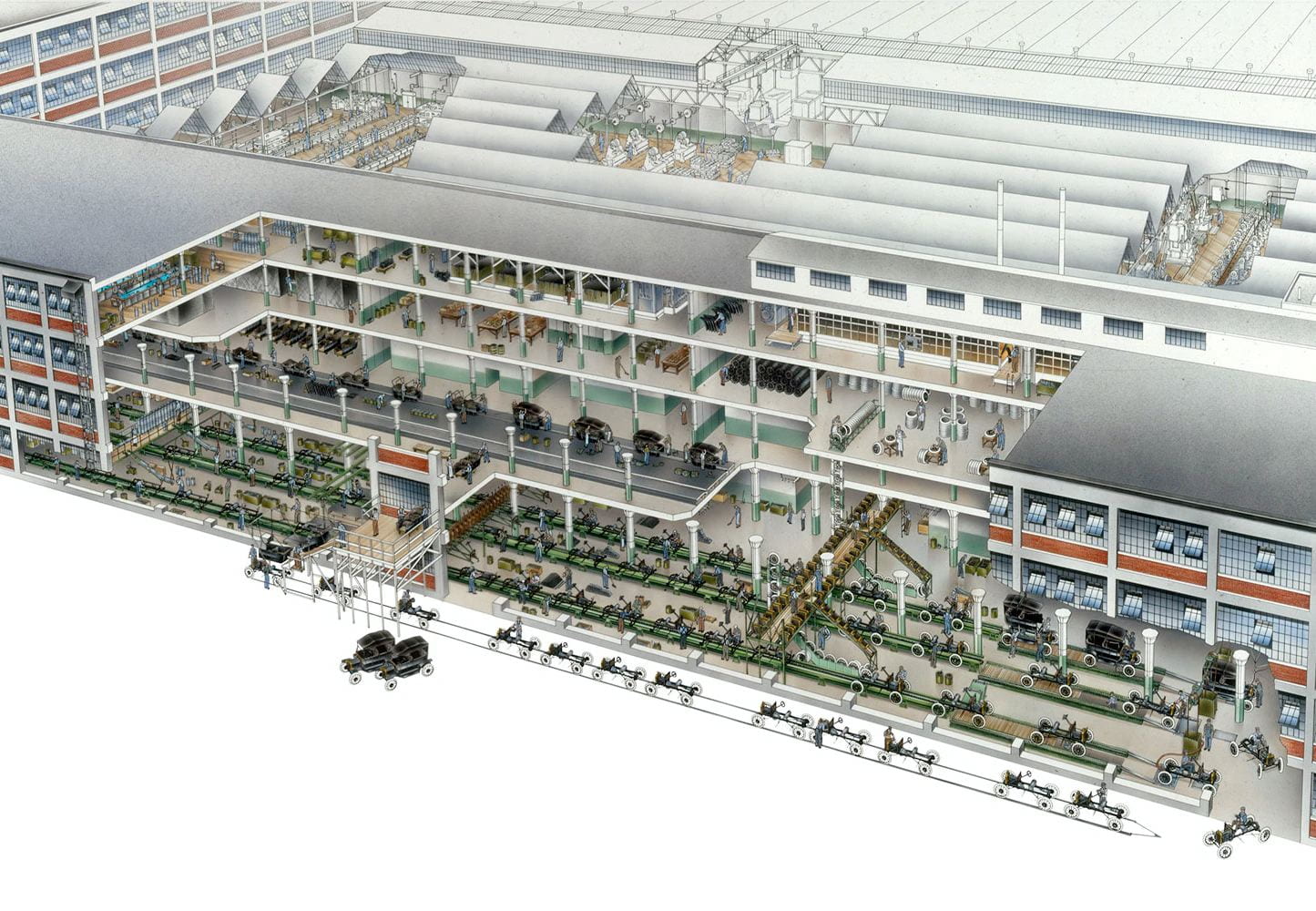 Between when the first Model T rolled off the assembly line in 1913 and when the fifteen millionth rolled off in 1927, the car’s appearance did not change significantly. The car chassis, motor, and color-scheme in 1927 were almost identical to 1913. Despite variations in the number of seats and exterior of car, the motor and chassis beneath were consistent and unchanging over time. Henry Ford liked it that way to bring down costs and to produce the greatest variety of car types with as few variations as possible to the car’s internal structure.

However, although Ford resisted changes to his car design, he was always redesigning the factory floor and assembly line to produce the greatest number of cars with the least amount of human labor. In this same period from 1913 to 1927, the Highland Park factory was constantly redesigned and expanded. Few records survive of all changes to the factory. However, the 1915 book Ford Methods and the Ford Shops includes detailed plans and photos of the factory at one point in time. Ford was still tinkering with the assembly line, as Model T production had begun just over a year before this book was printed. Within a few months of these photos, assembly line methods had improved once again as Ford redesigned the factory floor shown in this film. Rather than documenting Ford production for all time, this film captures Ford production the way it looked in the months it started. 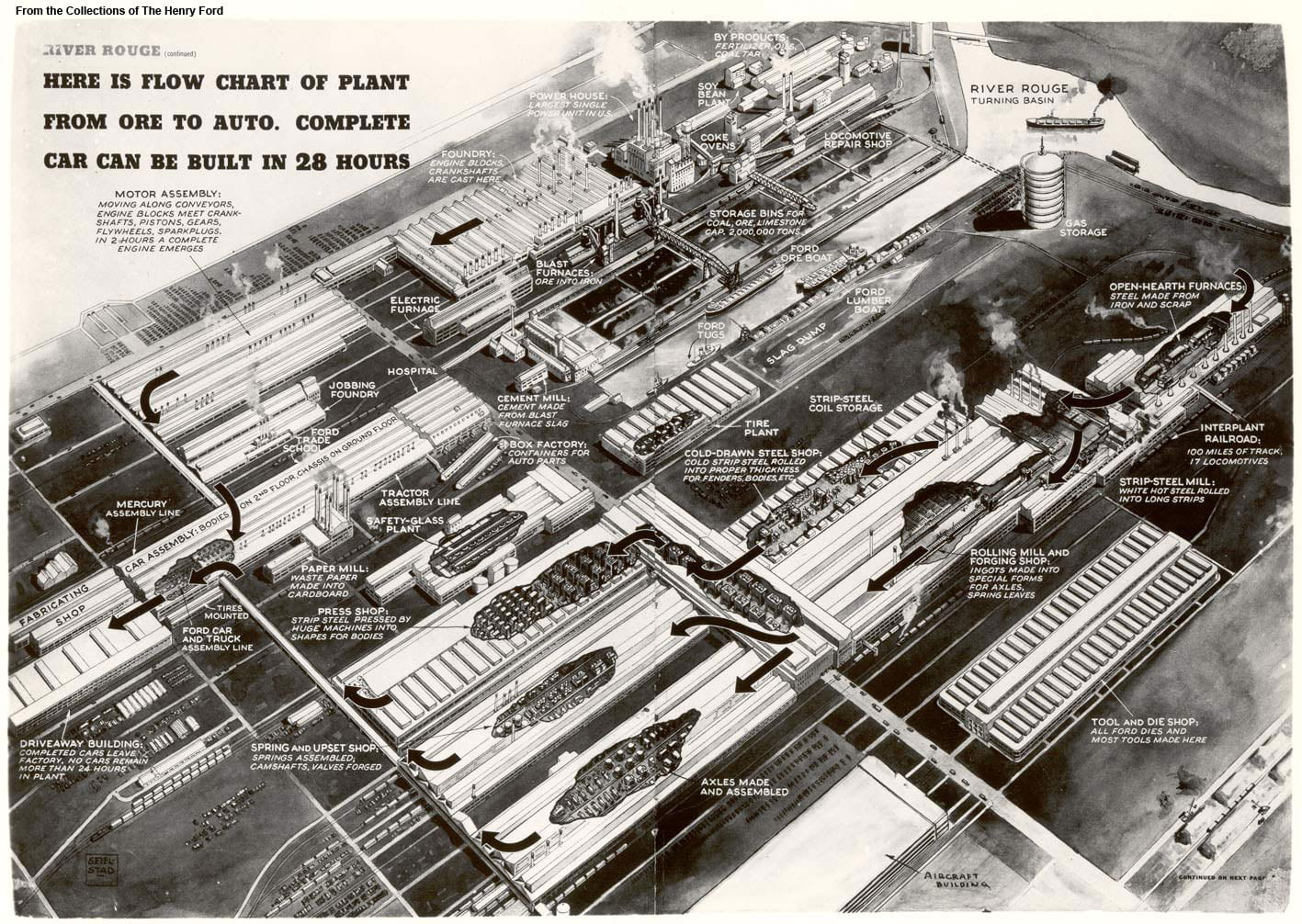 After Ford stopped producing Model Ts in 1927, newer models started production at the new and larger factory at River Rouge, where Ford makes cars to this day. The Highland Park factory switched to producing other goods like tractors and later tanks for WWII. Within a few years, production methods had so quickly improved under Ford that Highland Park became too small and obsolete. The factory was largely demolished, and with its demolition the initial appearance of Ford’s first and greatest invention was lost for all time: the moving assembly line.

Some of the factory buildings still stand, and the specific part of the factory shown in this film still exists. But the buildings were all cleared of their original machinery, and the most impressive part of Ford’s invention was not the factory itself but instead the equipment and processes within that factory that are no longer visible. The buildings themselves were simply functional warehouses designed with large open spaces to allow the easy movement of machinery.

The entire complex covered many acres, and the other factories that supplied the Highland Park factory with materials and components created a web of trade that spanned the globe. Instead of filming the entire process, this film focuses on the final and most important stage of production where finished parts from all over the world and factory complex came together for final testing and assembly.

Model T shown in film can be downloaded as a computer model at this link.