I am often aghast when I walk through downtown Newark. The corporate towers of the “Renaissance” Center ignore the very city that gave them millions of dollars in tax breaks. They erect austere metal fences and protect their towers with zealously obedient “security” guards. They are scared of Newark.

When Panasonic decided to move their national headquarters to Newark, I hoped they would buck the trend of icy disrespect. But, I saw that their new building turned its back to the city like all the other lifeless behemoths downtown. I wrote the following petition, signed by Newark children during the opening of Riverfront Park.  On 11 June 2012, when the Central Planning Board asked Panasonic to open their grounds for public access, I read my petition. 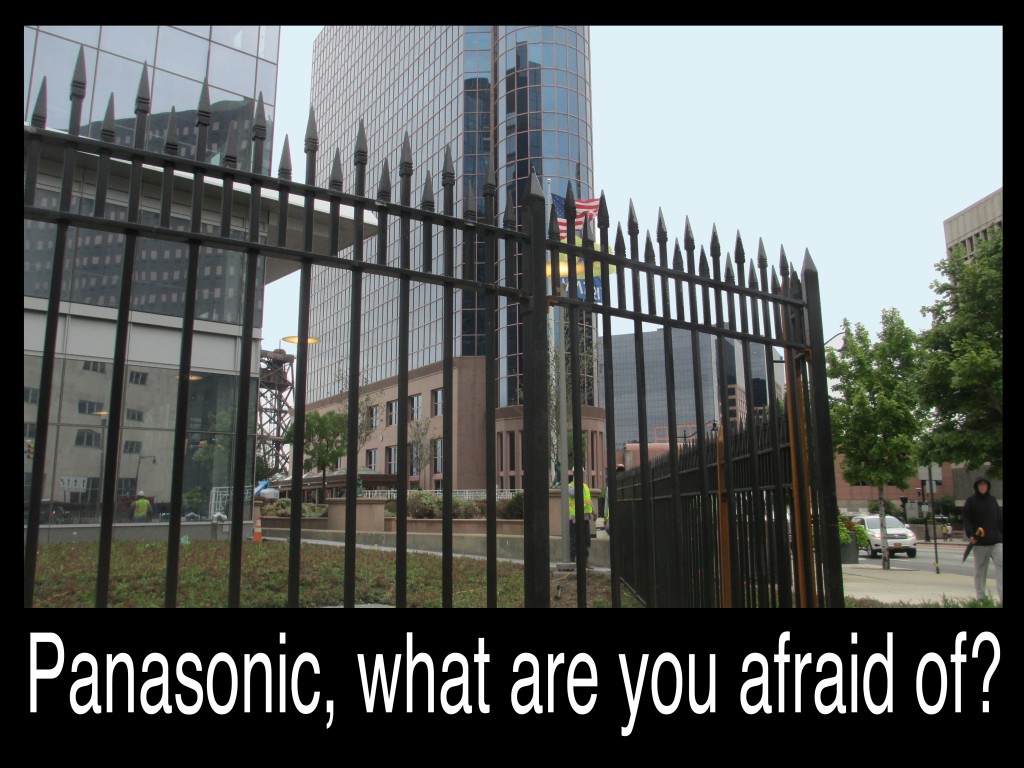 We are children of Newark, the new home of Panasonic North America.  We would like to start with Oscar Wilde’s story, “The Selfish Giant”:

There was once a “selfish giant” who had a most beautiful but closely guarded garden, where, to his dismay, all the little children were found playing. Scaring the children away angrily, he built around the garden a high wall, with a sign: “Trespassers will be prosecuted.”  Children could no longer go in to play, but dreamed about all the fun behind the wall.  With the children’s absence, the trees never blossomed again, the animals disappeared, and the garden was always barren.  The selfish giant no longer heard the birds or smelled the spring air.  Then, one day, to the giant’s amazement, the garden was in blossom again.  From the window of his fortress, he saw the children had crept through a hole in the wall to play in the garden again.  Finally, the spring had melted his icy heart.  The giant “took an axe to knock down the wall,” and played with the children in the beautiful garden.

When you moved to Newark, we were hoping to have a socially responsible new neighbor.  We expected your home to be different from the corporate winter gardens we have often seen here.

As your glassy home steadily rose, we were mistaken.  Surrounding the building, a tall metal fence with spearheaded points rejects the surrounding world and separates the lonely giant from the city.  Strategically located at the gateway to our city’s newly energized waterfront, the Panasonic winter garden, however, tells a story of the giant in the fortress, his feebleness, his fear, and, most of all, his old urban biases.   We, the children, who were born and grow up in the surrounding neighborhoods, ask you, the giant, to “take an axe and knock down the wall,” and to open your garden to Newark and its people.  As a neighbor, this is the least you can and should do.

The Children of Newark

This petition and the poster above were featured in a June 2017 exhibition about about planning and urban policy. The exhibit was organized by Damon Rich, former planner for the City of Newark, and exhibited at the Yuerba Buena Center for the Arts.