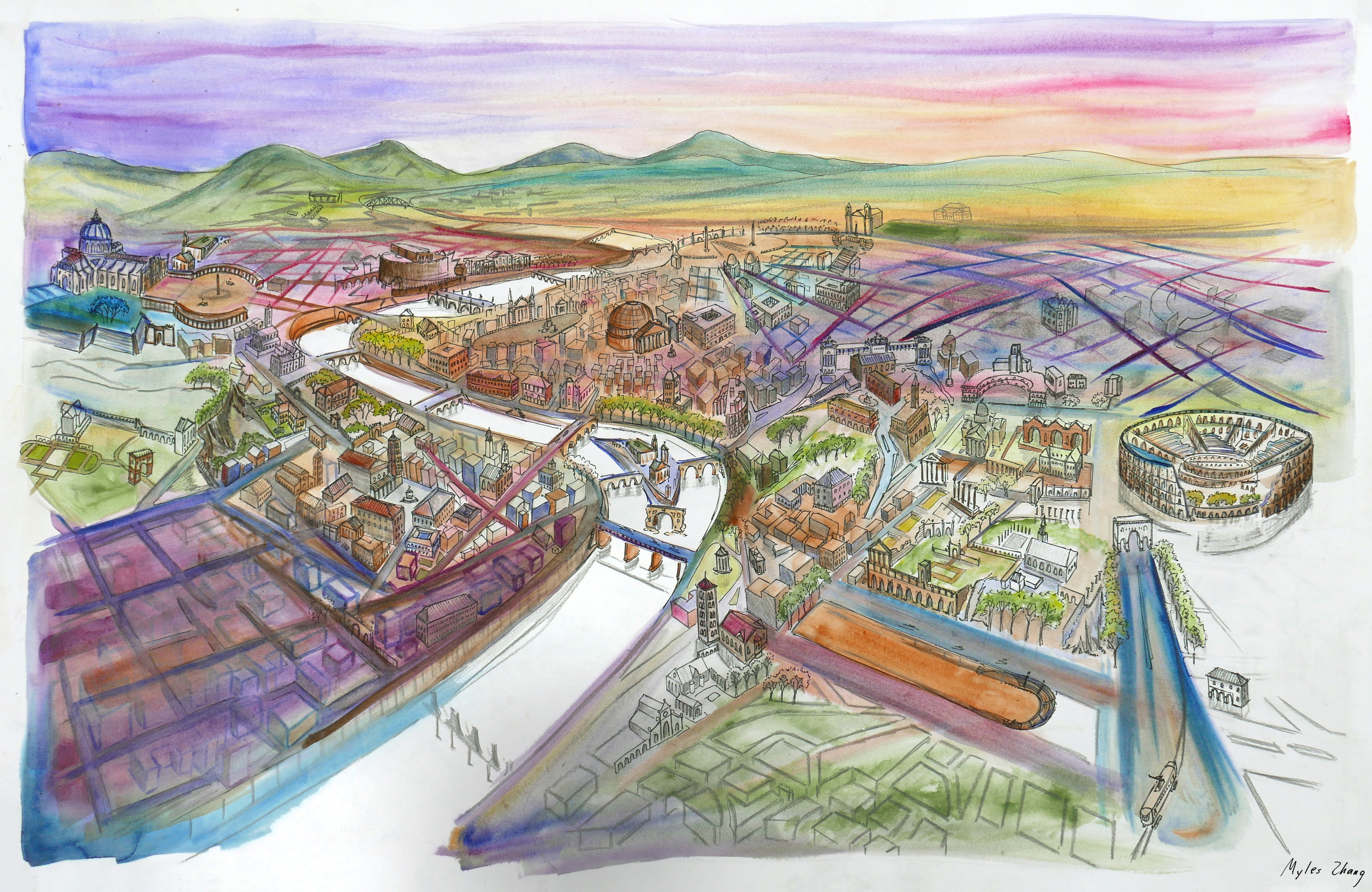 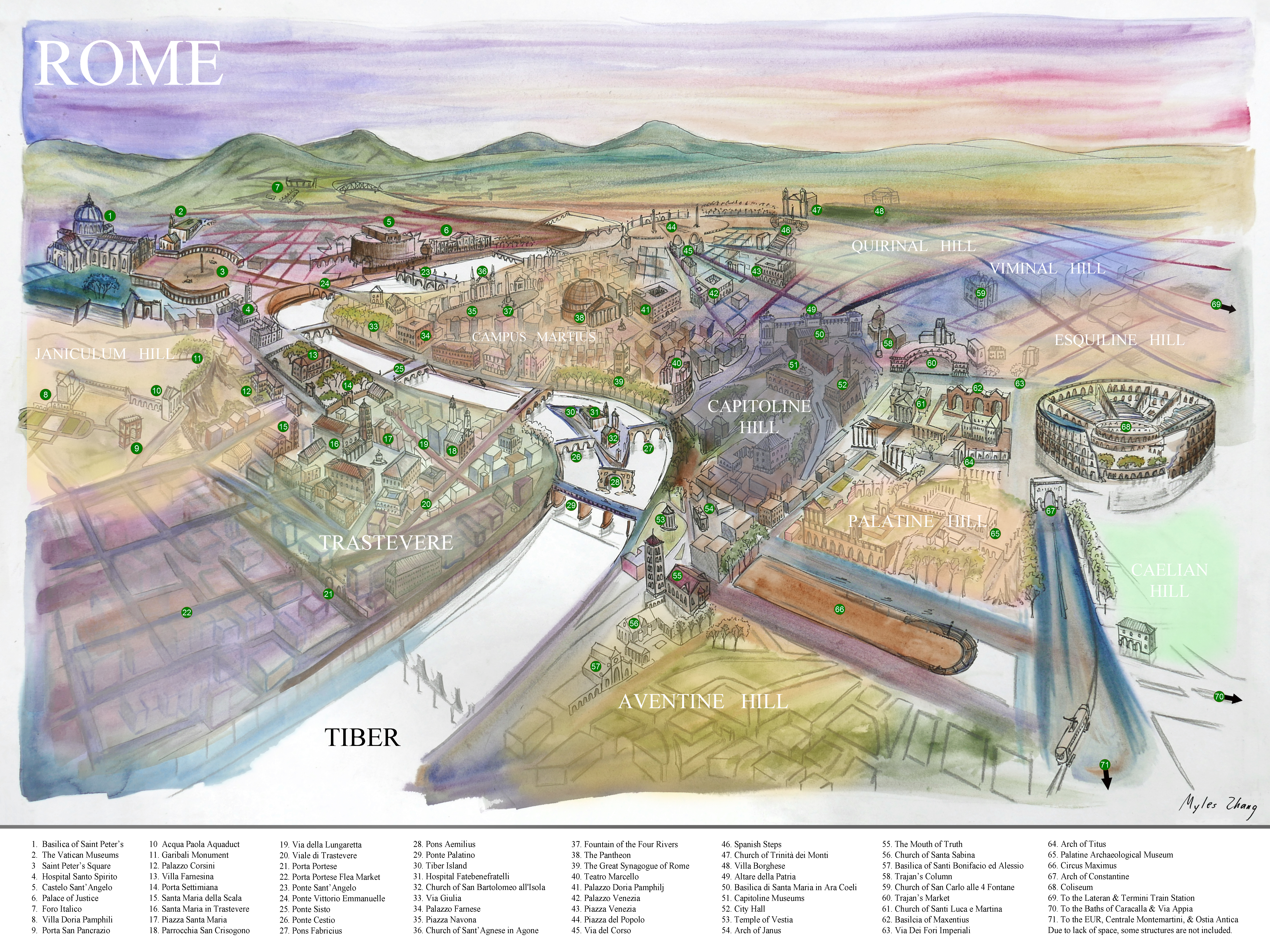 For a labeled map of Rome, click on the image above.

Rome, the Eternal City, the city of a thousand jeweled churches. Each church a treasure trove of glistening gold and baroque drapery cascading over its roof and walls. Each street a channel to and from some unexpected street side treasure: A Roman coffin turned public fountain, a marble column turned city wall, or a dark alley where the sound of water drips eternal.

Rome is the city of reinvention with each subsequent structure built on the physical and symbolic history of Greece, Rome, the Middle Ages, and then the Renaissance and modern era. Physicist Isaac Newton once proclaimed that: “If I have seen further, it is by standing on the shoulders of giants.” Rome, too, can remind herself that: If I stand more powerful and majestic, it is not thanks to current accomplishment but to the bedrock of history that accumulates treasures through time and value through age. Rome, too, stands “on the shoulders of giants:” The Roman Empire gave Rome her aqueducts and temples, the Renaissance gave Rome her churches, and the hand of Mussolini gave Rome her fascist monuments and boulevards sliced through the urban core.

Despite being grounded in history, Rome is very much a city of the present. The human fabric of this city may have left the urban core with waves of gentrification and tourism, but the spirit of a living and breathing city endures. North African immigrants peddle their umbrellas and selfie-sticks in the shadows of the Coliseum. Mass with the Pope continues in Saint Peter’s beneath Michelangelo’s majestic dome. Tourists may come and go. Time may pass. The Eternal City will endure and evolve.

When I returned home, I painted a map of Rome from memory (seen above). The streets of the city radiate from its center. When I gaze at this map, framed in my room, I am reminded of the generations of architects who passed before me. I wonder in what way will I contribute to this architectural legacy, adding the language of my structures to that of generations before me. Rome still appears in my dreams, when I walk through the city streets on the cobblestone path that guides me forward. When I awake, I have an image in my mind of where I traveled. I dream and envision paths and cities, unbounded by the limits of reality.

Roman columns abut the Church of San Nicola in Carcere.

The Maltese Keyhole: A View Toward Saint Peter’s

Outside the Pantheon (Photo credits to Maia Zhang)

Via Appia with Medieval Fortress

The Forum by Night

The Forum by Day

The Forum of Caesar

The World of Piranesi

Cat Sanctuary of the Piazza Argentina

Italian reads: “And the beast who does not gather…” 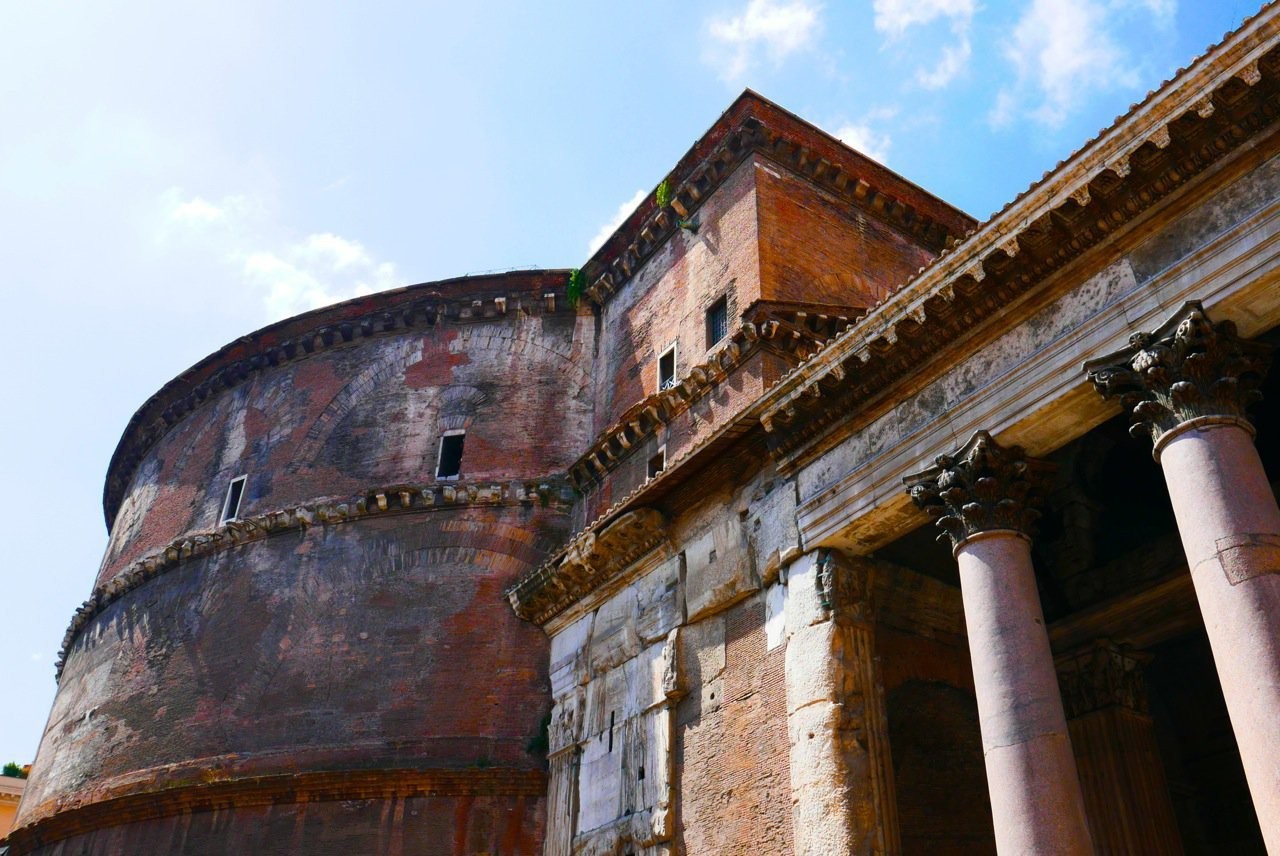