1220-c.1225
Master Robert de Luzarches began work on the foundations and lower wall.
He may have been assisted by Thomas de Cormont

This film shows the cathedral in cross section,
exploring the relationship between interior and exterior spaces.

Viewers approach Amiens from the west, like medieval pilgrims did. Viewers then move through the complex system of flying buttresses that support the cathedral vaults. The animation then reconstructs the dynamic geometry that engineers encoded in the cathedral floor plan. The film closes with the view from below the foundations, as if the cathedral were floating on air.

Along with the Parthenon, Amiens Cathedral is introduced each semester to students in Art Humanities. This seminar has been taught since 1947 and is required of all undergraduates as part of the Core Curriculum. Through broad introductory courses in art, literature, history, music, and science, the Core aims to produce well-rounded citizens of Columbia University students. Amiens was chosen as representative of all Gothic architecture, and as a lens through which to teach skills of visual analysis. This computer model I created instructs over 1,300 students per year.

Based on the computer model, I produced the three short films above: (1) a construction sequence, (2) a digital flythrough of the finished cathedral, and (3) a speculative animation of the cathedral in cross section. This trilogy is complemented with music from Pérotin (the thirteenth-century French composer) and Josquin des Prés (the fifteenth-century composer). Both musicians also happen to be featured in the Music Humanities component of the Core Curriculum.

My objective is to digitize and re-imagine Amiens. To borrow a quote from Viollet-le-Duc, the legendary nineteenth-century preservationist-architect of Notre-Dame of Paris, my aim was “to restore the building to a state of completeness that may have never existed.” For instance, Amiens lost almost all of its original stained glass windows and large parts of its nave. My project responds by presenting the cathedral in an idealized light. Awkward walls, later additions, and anachronistic features can all be airbrushed away from my model, so as to reveal how the master masons originally envisioned their cathedral in the thirteenth century. 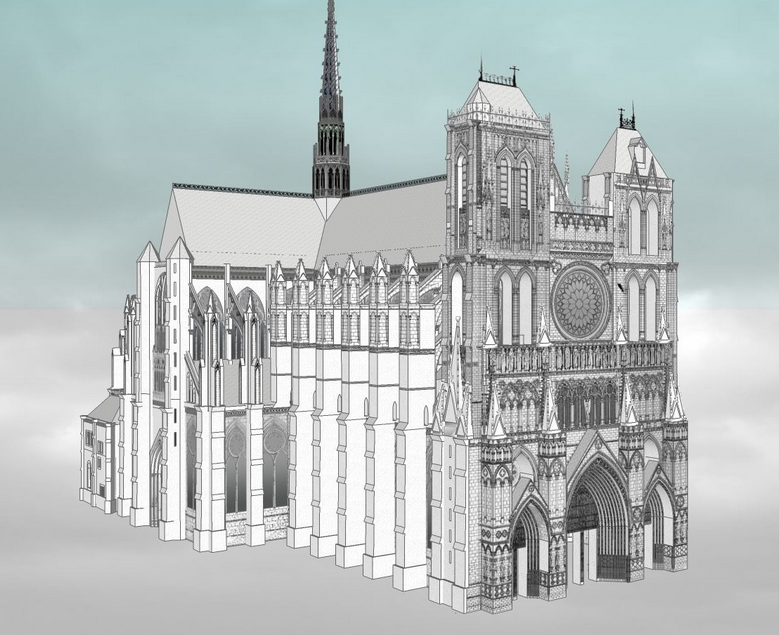 A building is experienced as a sequence of sights and sounds. A research text about such a building, however, can only capture limited information. Photography, film, and computer simulations are, in contrast, dynamic and sometimes stronger mediums to communicate the visual and engineering complexity of architecture. This project seeks to capture dynamic Amiens through a visual, auditory, and user interactive experience. Through film, one can recreate and expand the intended audience of this architecture, recreating digitally the experience of pilgrimage.

In Viollet-le-Duc’s 1863 book, Entretiens sur l’architecture, he presented Gothic architecture as the synthesis of a Roman basilica and a Romanesque church. After several centuries of evolution, these two forms merged into the singular form of the Gothic cathedral. For him, the Gothic cathedral (particularly Amiens) was the pinnacle of human architectural and aesthetic achievement. In other words, the cathedral’s form and plan evolved in response to theology and changes in the rituals of the Mass.

The two animations below illustrate Viollet-le-Duc’s thesis about Gothic. Although later scholars dispute his simplistic analysis, his work remains influential.

In the absence of surviving written records, many scholars read cathedral construction as a proxy for economic growth, or as a symbol for the structure of medieval society. The decision of where and when to start building a cathedral was tied to the right economic and political conditions. The large majority of cathedrals were built in the region of Northeastern France during the High Middle Ages – during a period of remarkable economic growth and productivity in the thirteenth century. Construction slowed after climate change caused failed crops, followed by the Great Famine (1315) and the Black Death (1350). The economic conditions and cathedral construction never rebounded for a long time afterwards, and when construction did rebound, Europe had entered the Renaissance with a new aesthetic sensibility different from Gothic Amiens

The cathedral can also be read as a political symbol. Funding came from a combination of donations, indulgences, and taxes on church-owned farmlands. The logic between competing regions and feudal kingdoms in medieval France reads something like: the larger and prettier the cathedral, the larger and more powerful the city and sponsors behind it. For many of these towns, the size of the cathedral was well out of proportion to the actual size of the town. Amiens, for instance, was one of the largest cathedrals in Europe for a town of ~26,000. The other cathedral town of Chartres was, similarly, competing with Paris for power and independence. Cathedral were architectural symbols for the competitions between cities and regions. In this light, the cathedral became as much a religious space as a political statement of civic identity.

I am indebted to the expert guidance of medieval historian Stephen Murray, who mentored me in the fall 2016 seminar Life of a Cathedral: Notre-Dame of Amiens. I also thank Columbia’s Center for Career Education for funding this project through its Work Exemption Program.

Anyone can download and edit this model for free with SketchUp. Over 3,000 people have downloaded this model, and numerous others have 3D printed it as part of their architecture studios. Among software, SketchUp is easiest to learn. Within minutes, students and teachers unfamiliar with SketchUp can build their own models with ease. In response to several rounds of edits and suggestions from Stephen Murray, I finished this model and exported the animation for final edits and special effects.

In this recorded lecture, I describe the workflow and editing process behind this project.

– Based on Stephen Murray’s measurements and drawings of Amiens from 1990 (link)
– And these hand drawings by George Durand from 1901-03 (link).

This project is published to Columbia’s website. I expanded on Amiens Cathedral for my senior thesis about the medieval church of St. Denis, and I continued building computer models as a research assistant at Columbia University’s Media Center for Art History.

I also researched the construction of:

The cathedral from your computer

This model shows a section of Amiens’ nave with the labyrinth below. Photo-realistic textures from actual photos and drawings of Amiens enhance the illusion of reality. Click numbered annotations to view details. Click and drag mouse to fly around the model. Please be patient while the model loads.

Approaching Amiens through the city gates

Moving through the city

Confronted with the west façade, 120 feet wide and 200 feet high

Treasury (below) and choir (above)

Gallery is organized sequentially to mirror the experience of walking through the cathedral.

Triforium of the nave

Chapels in the apse

Triforium of the choir

Wood rafters inside the roof

Computer models allow us to explore architecture in ways not possible in reality. With Amiens floating in the sky, one looks up to the grid of vaults and the forest of columns. The cathedral is real, but the views of it are imaginary.